Camp John Hay, Baguio City – In the annual report submitted by the Philippine Commission on Women (PCW) for 2021, John Hay Management Corporation (JHMC) was listed top 7 among government-owned and controlled corporations (GOCCs) which declared a high percentage of Gender and Development (GAD) activity expenditures over its total agency budget.

PCW monitors and evaluates the implementation of the Magna Carta for Women on government agencies’ compliance with the GAD budget policy. The report also shows the programs and projects that have high GAD attribution through the use of Harmonized Gender and Development Guidelines (HGDG) on which JHMC is listed.

Worth noting is that, of the declared expenditures, the cost of implementing the flagship or major programs of JHMC were identified as gender-responsive.

For years, JHMC has been challenged to integrate GAD targets into its plans and programs. With the leadership, guidance, and efforts of the Gender Focal Point System (GFPS) Members and the Technical Working Group (TWG), JHMC emerged to excellence. END. 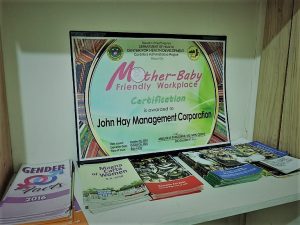